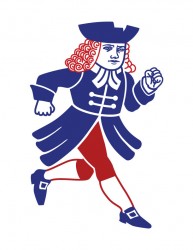 Two days before the Boston Marathon I drafted a letter to you announcing that registration had opened, to be sent today. It was consistent with the general tenor of my emails, light and funny, or at least an attempt at such.

I’ve now placed that letter in the finish line puke bucket. It no longer rings funny to my ears after Boston.

I’ve seen more than a few messages, as you have also, that the best thing to do for those who’ve been killed or injured is to first honor them in a manner you deem fit, and then continue running and living lives as appropriate to those that live in a free society.

None of  us knows what brews within the psychotic mind(s) of those that kill and maim innocents. But I do make the assumption that such people would probably be most happy if we cowered in fear.

I was never good at cowering. In 2001 I was one of 25,000 runners that ran New York while the fires of the World Trade Center were still burning. And the streets of the city that year were as crowded with spectators as I’ve ever seen — remarkable given the daily warnings of new harms to come. It was a dramatic rebuke to fear. Despite having bulls eyes on our shirts, runners and spectators alike, we felt it was the right thing to do and the right message to send to the world.

Paine to Pain is a chance to let your inner child run wild in the woods; it’s a celebration of life, as most such events are. Starting at the Thomas Paine Cottage, it’s also a celebration of the Revolution that brought us freedom 237 years ago. Embrace this race and others, both large and small, local and national, for multitudes of reasons.

We hope you will join us on October 6th, as we expect another record-breaking crowd. Registration is now open, and you can sign up here, with appropriate discounts for those that register early.

If you are a member of NewRo Runners, you can use the discount code that we sent you earlier today. Veterans and active military, please type in “VET”. Some things in life, I’m pleased to say, still work well on the honor system.

In addition to raising money for the trails, we are also pleased to associate ourselves this year withThe Hole in the Wall Gang Camp, created by Paul Newman, so that children coping with serious illnesses could have a special hideout where they could simply be kids. In the words of one young camper, “I love it here. Sometimes you think being so sick gives you limits, but the Camp helps you try anything.”

Runners receive complimentary entry when they raise $250 or more for the Camp. To learn more about how you can Run Inspired with Team Hole in the Wall, contact info [at] teamholeinthewall [dot] org.

Finally, this race is not possible without sponsors. Our Gold level sponsors thus far are: