On Sunday we didn’t just crown a champion, we coronated a king. What else can you say about a 4x Paine to Pain runner who has amassed a record like this:

That runner is Luis Francisco of Mahopac, NY. And King Luis becomes the first male to ever repeat as champion. Luis was followed to the finish line by Pete Tedesco of Larchmont (1:23:27 on the gun) and Ben Collier (1:23:51) from a very substantial Brooklyn contingent that joined us in Westchester for our little jaunt through the woods.

There were other shining lights on the day, of course, other than Old Man Weather who decided to treat us to cool temps and clear skies . (Where was all that rain and mud I asked for?)

One of those lights was a bottle rocket of a kid, JonThomas Bierman, who was not only running P2P for the second time despite being just 13 years old, but managed to scalp a full eight minutes off last year’s maiden voyage by running 1:33 and coming in 25th overall. Methinks our front runners had best be worried if J.T. Firecracker keeps coming back, for this princeling of the trails may one day snatch that laurel wreath (if we actually used laurel wreaths).

One thing I noticed this year that was a bit different than others, was how long folks lingered at the post-race party. Hey, we’ve had good post-race weather before, so that couldn’t be the thing.

Was it the live music from Third Stone? That was the first time we’ve done that, and frankly, they were awesome.

Maybe it was the post-race food from A.J.s Burgers (cold pasta w/ vegetables), Texas Roadhouse (pork sliders) or Got Thyme (gazpacho!)? Maybe the cold chocolate milk from Hudson Milk or yogurt from Dannon? The giant subs from DeCiccos Markets? Or the chili provided by our own Finish Line Coordinator, Michele Stevens and family? Or the pace cars (and cookies!!) from New Rochelle Chevrolet?

Or the tremendous community support (more on that to come)?Or, perhaps, runners just wanted to see who would walk away with our engraved tankards and swag from Salomon?

And we had more massage and physical therapists than ever before. (Thank you MS Strength, Symmetry PT and Finish Line Physical Therapy!!)

I’m not just aimlessly plugging sponsors, of course, because every single one of them brought something to the table.

Finally, you know what comes after talking about a few of our sponsors? Giving out the Race Director’s Prize!

This award is given in my complete discretion as Grand Poobah, basically based on my mood. <cue up maniachal laugh> And isn’t that a totally awesome power to have?

A little history of the award, which is a free ticket back to P2P. Our past winners:

2011: The award was created on a whim when Jillian Perrius turned a cartwheel down the home stretch.

2012: To Kristin Iverson Koch who flashed me a big smile over bloody knees when I saw her in the finish area.

2013: To Erica Weisberg who added at least 15 minutes to her time when she stopped to assist an injured runner.

2014: To P2P veteran, Michelle Robotham, who was volunteering, and stopped traffic with her body when she saw cars  pouring on to the course.

2015: To  Lori Trimble, a P2P veteran who ran the legendary mud run in 2011. And returned to run this as her first race after surgery. She had just donated a kidney to her brother.

The first  is Tim Decker of the New York Flyers, who ran the Bronx 10-miler starting at 8 am, hopped in a cab, showed up to our start an hour late, and became his own special wave of sorts by racing Paine to Pain. Crazy, right?

You know else gets an honorable mention? John Mazzei. A couple years ago he tried to run this race barefoot, and I don’t mean barefoot style. He fell short back then and had to slap on some emergency footwear. But on Sunday he came back to complete his mission. More crazy.

A final runner-up was Chris Pert, The Bronxville Joggler … doing Paine to Pain while juggling? Seriously? And finishing in 2:01? Personally, I have this desperate need to FOCUS ON THE DAMN ROCKS AND ROOTS. Or I fall. Chris clearly has a skill set I don’t have. And knows how to entertain folks in the process.

But you know where this award must lead, don’t you? It leads to Pam McGonigle, who happens to be both blind and a superb athlete (4x Paralympian, gold medal winner) who ran our trails in 2:04, finishing a remarkable 12th out of 54 in her age group. 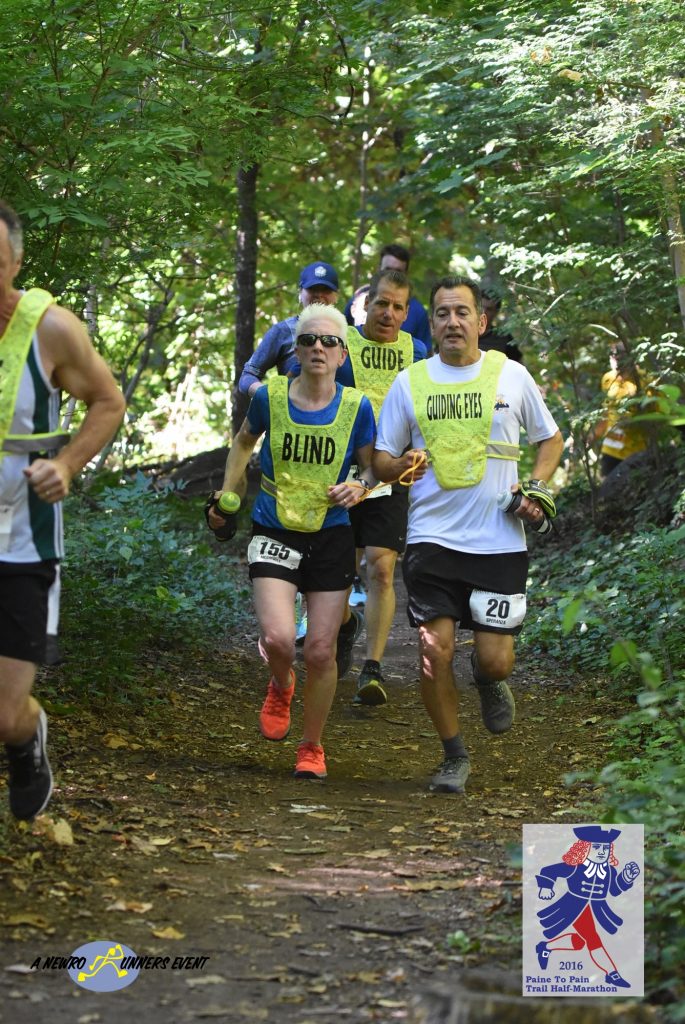 She ran the race tethered to her selfless guide, Nick Speranza, running in his 8th Paine to Pain, as he called out the rocks, roots and other tripping hazards of the course he knows so well. Nick also built out the team with two other guides (Bill Foley and Greg Shoroko) to assist in case he got hurt. (It was he who had trained Pam’s guide dog, Maida, to run with her.)

But if you think Pam running Paine to Pain, and doing it quickly, is a remarkable story, let’s add some whip cream to this sundae story: She stopped running after the 2004 Paralympics and only started again four months ago.

And now the cherry on top: She has never run a half marathon. And she has never raced on trails. This gal was a miler on the track.

Yes, I am flabbergasted also. When she crossed the finish line, I immediately looked at her knees, elbows and shoulders, looking for the inevitable blood or dirt from having taken a tumble or three that I knew must happen. But nothing. Zip. Nada. She was spotless.

When reached by email after the race, Pam had this to say:

My success hinges on the commitment of guide runners.  I am nothing without them so I am grateful for the personal sacrifices they make to help me complete a race.  Nick is extraordinary in his ability to guide run.  The communication and trust required in that environment is phenomenal.  I have run with many guides, some of the best in the world, mostly on the track and roads (since I am traditionally a miler) and I can tell you that Nick is one of the best guides I have ever run alongside.  I had total trust in his ability to get me though that course.  Never a doubt.  I believed in him and he believed in me and therefore we succeeded.

I found the people at the race very welcoming and supportive.  It was truly a pleasure.

The endorphins are still working and I’m figuring out my next race.  I can see where one gets addicted to the challenge of the trail.  I suspect it won’t be my last such race.  🙂

It’s worth noting that Nick stumbled and almost fell once on a rocky section in Saxon Woods during the race. But he didn’t have to worry.  Pam caught him

While I am sure she trains and runs for the pure joy of athleticism, she ends up as an inspiration to others — especially those who found themselves being assisted by Empress Emergency Services at an aid station, or in the Montefiore medical tent due to wipeouts.  Whether she wants it or not, Pam stands as testimony as to what humans are truly capable of, if we set our minds toward that goal.

So this year’s Race Director’s Prize is a twofer: Both Pam and Nick come back next year as my guests.

But others in her 40-49 age group better watch out, for they might find Pam gunning for that podium. If Nick can keep up with her.
———
Still to come: Free photos, a blog post of race reviews, and a note of thanks to our volunteer. Stay tuned!