Holy smoke! And by that I mean, those guys were smoking!

The old course record of 1:21:27 was crushed not once, not twice, not three times, but four times. And almost five. Really, that just doesn’t happen. But it did.

Patrick Dooley of Stamford, CT roared out of the woods and tore down the home stretch to finish in 1:17:54, chopping an astonishing 3.5 minutes off the four-year-old course record. That’s a 5:57/mile pace!!!

And he was followed to the tape by Corey Levin of the Bronx in 1:18:44 and two-time Leatherman’s Loop champ Will McDonough of New Canaan, CT in 1:19:18. 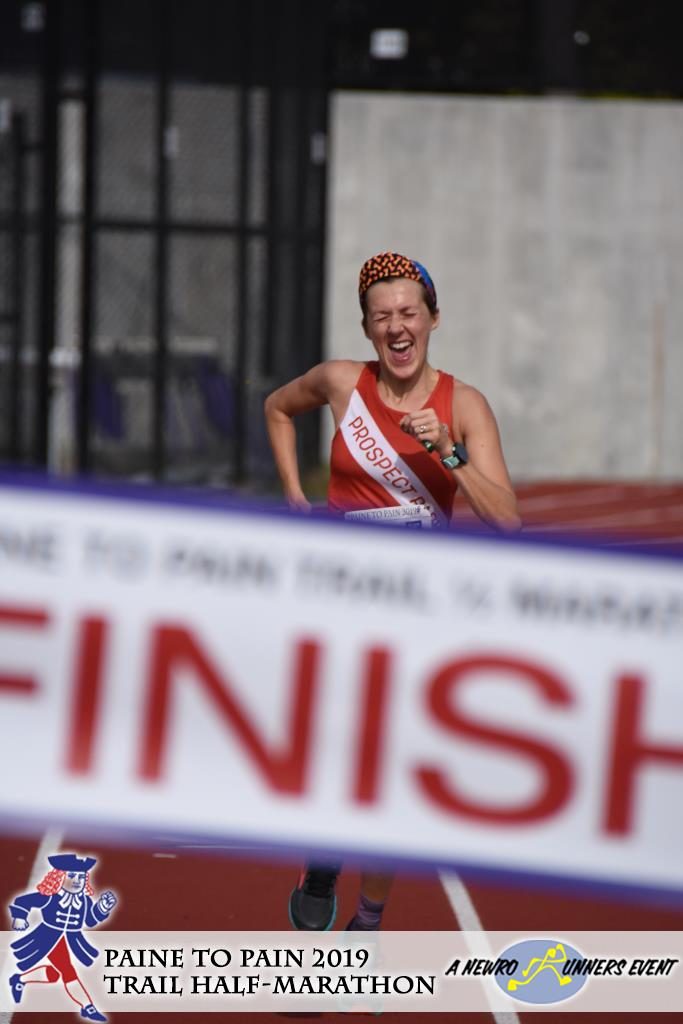 And on this beautiful autumn morning with temperatures in the mid-50s at the start, an exuberant Joelle Reeves of Brooklyn raced around our rocky, rooty, leaf-covered loop to take the women’s crown in 1:29:12. And you know what? Last year she broke the course record but still came in second! She also becomes the second woman to crack the 1:30 barrier.

Following her to the finish was 2017 champion Kelsey Luoma of Brooklyn in 1:31:39. Lindsey Felling of Larchmont, last year’s overall Trail Mix Series champ, took the third podium spot in 1:36 (if we had an actual podium).

In addition to the engraved copper tankards 1-2-3 each received, Solomon is providing each of our number ones with a free pair of trail shoes. The number twos get hydration vests and the number threes get hoodies.

And, as always since the birth of this race in 2008, our two champions come back as my guest for as long as I remain Race Director.

While rain and mud always makes for fun running through the woods, my rain dance didn’t work this year, and we were stuck with low humidity and a delightful finish line festival with great music and too much food. My apologies. 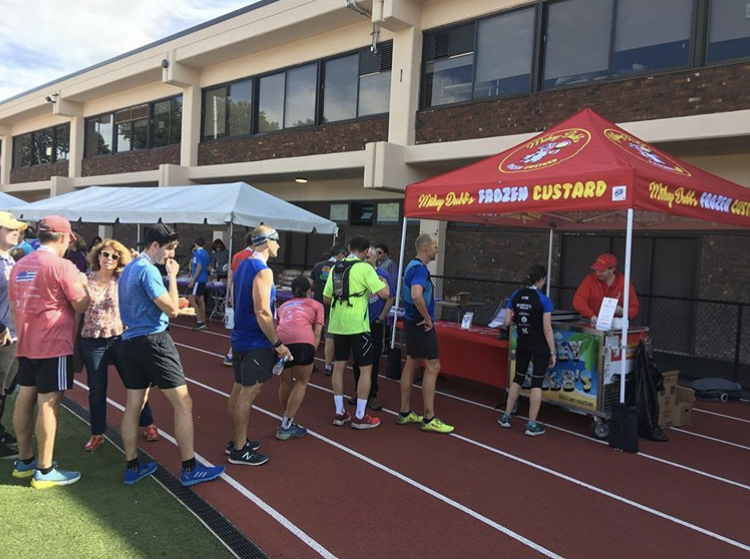 Some of that great food was supplied by repeat supporters AJ’s Burgers, Texas Roadhouse and DeCiccos, and more by newcomers Beechmont Tavern, Smoke and Spice and Mikey Dubbs.  We had Pepsi for the water, Athletic Brewing Co. for the beer and Ultima for the sports drink. And our new car sponsor, Rye Subaru — could there be any more perfect fit for trail runners than Subaru? — came with the cookies (!) in addition to leading waves up Broadview in their pace cars.

We are also grateful for those finish line stretches and massages by Total Form Fitness (Hartsdale), Premier Physical Therapy (Pelham) and Stretch Lab (Scarsdale). And we welcome Orange Theory (Mamaroneck) — which took over Water Stop #1 and made it their own –to the P2P fold!

Hey! When you want to put on a top-notch event at a dirt-cheap price it takes sponsors like that to help along. Without them the race would cost more and you would get less. And that would suck, as I like to say in legalese.

One of our sponsors has been with us for all 12 years: Westchester Road Runner in White Plains. How cool is that? I’ve lived in Westchester for 20 years now and have bought every pair of running shoes from them during that time. OK, except for the pair that I lost while I was on vacation and I needed another pair now, though I think they will forgive me for that.

But this race doesn’t just need sponsors, it also needs volunteers. Lots and lots of volunteers.

If you run races and haven’t had a chance to see them from “the other side” I urge you to do so as a volunteer. But don’t do it just to gain entrance to a mega-race, but rather, as an end in itself. Do it simply because these races (and so many other organizations that rely on volunteers) will not happen without them. Yet such events (and charities) are what helps to define a community.

Now before I get to the Race Director’s Prize, which is awarded in my absolute and unrestricted discretion as Grand Poobah, I want to mention something about those shirts and medals.

You’ve seen the design of a dozen little running guys hatching in an egg carton since this was our 12th year.  But I wasn’t just being cute.  The race celebrates our nation’s birth since it starts on Thomas Paine’s farm. And a hatching egg represents birth. 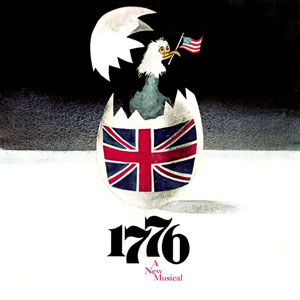 It was the essence of an eaglet being hatched that formed the logo for the musical comedy 1776. (It even had a song, “The Egg,” if you care.) I took that logo and ran with it, so to speak, reimagining and transforming it with a carton of 12 running colonial runners.

OK, enough with the symbolism and the fact that sometimes I see the race as performance art. (Surprise!)

Who gets the Race Director’s Prize? How will I use my vast dictatorial powers this year? And will they be used for good or evil? And will I make the award with a maniacal laugh?

It was tempting, I admit, to give the award to Tim “Double” Decker from the NY Flyers, running the race for the 11th consecutive time. He just had one small problem, and that was a conflict with the Staten Island Half being run the same day. He managed this problem once before by simply running the Staten Island Half and then coming to New Rochelle and running P2P starting at noon. This time he did it in reverse, running P2P with a headlamp and some deer for company, starting at 2:15 a.m. while I was staring at the ceiling trying to remember what race details I forgot. Tim made it to Staten Island in time to run a 1:36 to complete his double.

Sorry, Tim. But impressive as that was, not this year.

As many of you know, a runner went down hard in Saxon Woods just before the halfway mark. A bicyclist, who shouldn’t have been in the park, cut him off.  He very much needed medical attention

Two runners stopped and stayed with our fallen athlete, both sacrificing their own race to help another. Robert Gianotti, running P2P for the 4th time, and John Abrams running it for the 5th, were there to help. John, in fact, never made it back into the race.

And so this year’s winners are a twofer. They each come back next year as my guests, as if they are champions. Because in my book they are. So let it be written.
——
We had tons of great photos this year.
Results are here.
Race Reviews are here. I’ll add more as I find them!
——-

One thought on “2019 Race Director’s Recap and Prize!”