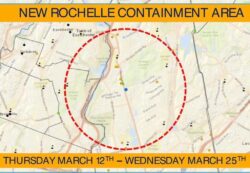 They called it the “containment zone.” And by “it” I mean a one-mile radius in New Rochelle that included both the start line at Paine Cottage and the high school finish line.

That was nineteen months, and almost 700,000 American lives, ago.

Putting this race together gave me the sense that we were, in a way, figuring out how to safely deal with the virus.   I’m not smart enough to know if the virus is leaving for good, or if our vaccines will hold for future variants, or if we just learn to adapt to it for decades. But if we wanted a semblance of normal we had to deal with it somehow.

So  back in April, I thought that 100% vaccination for runners was the best way of adapting. Thank you one and all for coming to terms with what we have, and what we did, and helping figure out what may be the new normal.

I profess to more than the usual excitement (and anxiety) on race day as months of planning came to fruition. My “back-up plan” had been to put “13th Annual” on the medals and shirts instead of the year, because when I ordered the stuff in August, who really knew what October would bring? Would the basement of Paine to Pain Global HQ be stuffed with boxes for a canceled event?

But the (13) stars were properly aligned, and even Old Man Weather cooperated, waiting for the sweepers to finish and the food to be eaten, before he showered down upon us as we did the clean-up.

Those who were concerned about rain and stayed home — and yes, there were many and I know who you are!– missed out on perfect running weather.

I’m guessing that Matt Baffuto thought the weather was just great as the Paine to Pain newcomer blazed to victory in 1:18:40, just off the course record.  That’s a 6:00 pace on trails for those of you keeping score at home.

Coming in behind him was Corey Levin — who also finished 2nd in 2019 when he broke the course record. And 3rd was 19-year-old Jonthomas Bierman, who first rocked this course as a 12-year-old after I watched him toe the start line with the best the county had to offer. I knew back then he would podium one day. 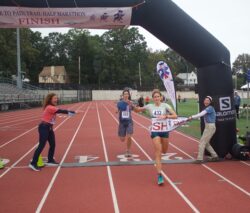 On the women’s side, another newcomer, Jeanne Mack of Brooklyn, became one of only a few women to crack 1:30 when she brought it home with a thrilling sprint to close in 1:29:40. She was followed to the tape by Michelle Cabrera  and Julie Piddington.  Congrats to all! (Results are here)

Apparently the trail was in great shape — except for some wasps that got stirred up (no, I did not plan that) — and well marked by our team of Trail Pixies.

From your perspective as runners, I hope the the race looked logistically smooth. There are three big reasons for this:  First, we had more volunteers than ever. And races like this — OK,  none are exactly like this — just don’t happen without volunteers.  Aid stations, intersections, registration, timing, communications, parking, food ordering and  service, volunteer coordination, start line and finish line logistics, website, graphics, massage, the aforementioned Trail Pixies, and more.

Second, in addition to the involvement of four separate police departments, the municipalities have been amazingly responsive regarding upkeep of the trail. Specifically, the Parks Department of New Rochelle, the Conservation Department of Mamaroneck and Westchester County Parks. It appears vastly different today than the disjointed series of parks that I first ran 20 years ago, and when problems crop up, those municipalities quickly spring into action.

And finally, our benefactors.  You really can’t put on a race like this, at a stupid-cheap price like this, without the community pitching in to help. Salomon was a returning sponsor and New York Presbyterian Sports Performance Institute was a new one for training athletes (located in the old EMS across from the old Lord and Taylor on Rt. 22.).

Westchester Road Runner has provided amazing logistics during every iteration of this race, and has a well-earned reputation as the best running store in Westchester. The shirt and medal design honoring Thomas Paine came courtesy of a P2P veteran, Sean Mosher-Smith at Echo Design Lab, and our web mistress is a former sweeper running PSG Studio for small businesses.

That band rocking you at the Finish Line Festival?  Third Stone, led by drummer Dave Bergamini — one of the teachers at the high school.

Out there on the infield you saw Athleta near the tents alongside local companies helping to work your aches and pains out, or assisting with training or nutrition: Finish Line PT, Premier Sports Recovery and True Fit Balance (with the cookies!).

Aid stations were filled by (#1) Orange Theory of Mamaroneck — coming despite the devastation of its business due to flooding from Hurricane Ida — (#2) True Fit, and of course, Girl Scouts at #3.

And communications were again provided by a band of ham radio operators out on the course, from the Westchester Emergency Communications Association. They alerted us to the course leaders and help us find injured runners to get them assistance if needed.

Finally, before we get to the, uhh, unusual Race Director’s Prize, some food:  Once again, New Rochelle institutions AJ’s Burgers and the Beechmont Tavern were at the finish line, with food supplemented by DeCicco’s, Trader Joes, H&R Bialy (the bagel place near Acme) and Mikey Dubbs with its delicious custard.

OK, who do I give the Race Director’s Prize to this year, that being a free entry to next year’s P2P?  Were there any outstanding feats of sportsmanship? The helping of an injured runner? A brave volunteer?

Reminder, the rules for this award are simple: I give it in my absolute discretion as Grand Poobah.

As I pondered that, the following story was handed to me on a silver platter. Sorry, kids.

In a departure from prior form, this year’s award is given anonymously, because the winner would spike my tequila with something awful if I revealed her name.

What form of heroics did she undertake?  Well, out there on the trail runners see clapping and hollering spectators. But a race director sees something different: volunteers and spotters who are there to assist.

This particular volunteer was in the woods. And she had to go.  Yeah, in that bear in the woods kinda way.

But she didn’t want to leave her post. So she did as the bears do. And trust me when I tell you that, for her, this is a very substantial departure from form.

I’ve been assured that no poison ivy was harmed in the process.

Now I know that she won’t run this race. So by the powers vested in me by me, because there’s no one to overrule a Grand Poobah, I hereby  grant her permission to gift her free entry to any friend or relative she wants. And I will make it up to her with an appropriate cocktail or three in the weeks to come.

My lips are sealed on her identity. 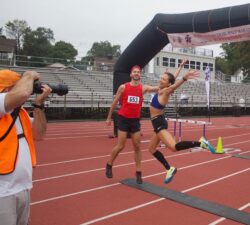 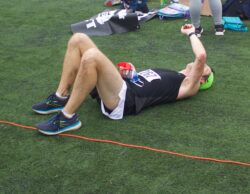